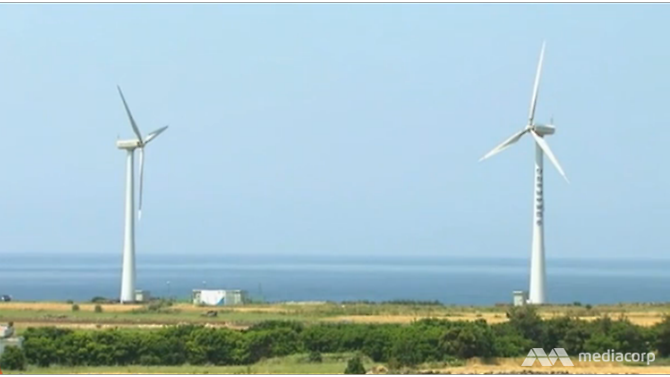 GAPADO ISLAND: Jeju Island is known among Koreans and foreigners for its beautiful scenery and unique island culture.

Despite rapid development, Jeju is hoping to become carbon-free by 2030. To achieve this, it is testing a pilot model on the nearby island of Gapado, whose 177 residents rely mostly on solar and wind power for their electricity.

Gapado, which means island of wind and waves, is aiming to become the world’s first carbon-free island. To do that, the residents have replaced electricity poles with underground cables, and have also installed two wind power generators and solar panels on top of their houses.

Kim Bu-jeon, a Gapado resident, paid only 10 per cent of the 12 million won (US$12,000) to have the solar panel installed in his home, and he is very happy with the investment.

The district office pays for the balance of the installation, and it has been working on this carbon-free project with the Jeju Special Self-Governing body for the last four years.

The office has spent slightly more than US$100 million to help Gapado become carbon-free. Jeju will use Gapado as a model to be carbon-free by 2030.

Jin Myoung-hwan is the head of Gapado, and he says most of the island’s energy needs are met by the two wind power generators and solar panels.

When cloudy weather disrupts solar and wind power generation, residents can rely on the energy earlier saved. The wind and solar generators are connected to a smart meter and smart system on the electricity grid.

Lee Young-suk, who manages the island’s microgrid centre, says the place is a like a giant battery pack.

The carbon-free island has made this place an attractive tourist-destination in recent years. There are only about nine cars on this island, and four of them are electric-vehicles.

Most tourists travel around the island on foot or on bicycles, and many are happy to do so as it is not often that they get to enjoy a whole island that is almost carbon-free.